Robert K. Massie: The Pulitzer Prize-winning author of Peter the Great, Nicholas and Alexandra, and The Romanovs returns with another masterpiece of narrative biography, the extraordinary story of an obscure German princess who became one of the most remarkable, powerful, and captivating women in history. Born into a minor noble family, Catherine transformed herself into empress of Russia by sheer determination. For thirty-four years, the government, foreign policy, cultural development, and welfare of the Russian people were in her hands. She dealt with domestic rebellion, foreign wars, and the tidal wave of political change and violence churned up by the French Revolution. Catherine’s family, friends, ministers, generals, lovers, and enemies—all are here, vividly brought to life. History offers few stories richer than that of Catherine the Great. In this book, an eternally fascinating woman is returned to life. Land of the Firebird: The Beauty of Old Russia
Suzanne Massie
4010
Tags:

'Land of the Firebird' is a WONDERFUL and ENGAGING in-depth look of Russian history from 987-1917, spanning the ascension of Vlad and the Orthodox Church to right before the Revolution. With colorful prose Suzanne Massie details the variety of Russian existence--tsars and serfs and merchant-princes and babushkas--no stone is left uncovered as she cross-references nearly a thousands years, writing with equal consideration of art, poetry, country-life, court-life, politics and its myriad games, myths and legends, influence "outside the sphere." A People's Tragedy, wrote Eric Hobsbawm, did "more to help us understand the Russian Revolution than any other book I know." Now, in Natasha's Dance, internationally renowned historian Orlando Figes does the same for Russian culture, summoning the myriad elements that formed a nation and held it together.

Beginning in the eighteenth century with the building of St. Petersburg--a "window on the West"--and culminating with the challenges posed to Russian identity by the Soviet regime, Figes examines how writers, artists, and musicians grappled with the idea of Russia itself--its character, spiritual essence, and destiny. He skillfully interweaves the great works--by Dostoevsky, Stravinsky, and Chagall--with folk embroidery, peasant songs, religious icons, and all the customs of daily life, from food and drink to bathing habits to beliefs about the spirit world. Figes's characters range high and low: the revered Tolstoy, who left his deathbed to search for the Kingdom of God, as well as the serf girl Praskovya, who became Russian opera's first superstar and shocked society by becoming her owner's wife.

Like the European-schooled countess Natasha performing an impromptu folk dance in Tolstoy's War and Peace, the spirit of "Russianness" is revealed by Figes as rich and uplifting, complex and contradictory--a powerful force that unified a vast country and proved more lasting than any Russian ruler or state. Nicholas and Alexandra: The Classic Account of the Fall of the Romanov Dynasty
Robert K. Massie
4007
Tags:

In this commanding book, Pulitzer Prize–winning author Robert K. Massie sweeps readers back to the extraordinary world of Imperial Russia to tell the story of the Romanovs’ lives: Nicholas’s political naïveté, Alexandra’s obsession with the corrupt mystic Rasputin, and little Alexis’s brave struggle with hemophilia. Against a lavish backdrop of luxury and intrigue, Massie unfolds a powerful drama of passion and history—the story of a doomed empire and the death-marked royals who watched it crumble. 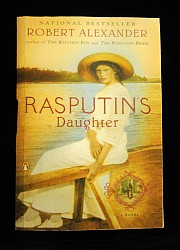 Called “brilliant” by USA Today, Robert Alexander’s historical novel The Kitchen Boy swept readers back to the doomed world of the Romanovs. His latest masterpiece once again conjures those turbulent days in a fictional drama of extraordinary depth and suspense. In the wake of the Russian Revolution, Maria Rasputin—eldest of the Rasputin children—recounts her infamous father’s final days, building a breathless narrative of intrigue, excess, and conspiracy that reveals the shocking truth of her father’s end and the identity of those who arranged it. What emerges is a nail-biting, richly textured new take on one of history’s most legendary episodes. When the American ambassador to Russia is assassinated, the CIA discovers that he was involved in black market racketeering in Moscow and hiding funds in bank accounts in the Caymans.  Former CIA agent, David Matthews, is called back into the Company and assigned to follow the ambassador’s beautiful, young widow, who is leaving for Moscow that evening. His mission is to learn if she was involved in her husband’s clandestine dealings with the Russians. David is booked on the seat beside her and assigned to become acquainted with her and follow her once they reach their destination. As David re-enters the realm of covert conspiracy, he learns he is not the only one in pursuit of the money as he gradually unpeels the layers of who she really is. The Romanov Sisters: The Lost Lives of the Daughters of Nicholas and Alexandra
Helen Rappaport
4016
Tags:

They were the Princess Dianas of their day—perhaps the most photographed and talked about young royals of the early twentieth century. The four captivating Russian Grand Duchesses—Olga, Tatiana, Maria and Anastasia Romanov—were much admired for their happy dispositions, their looks, the clothes they wore and their privileged lifestyle.Over the years, the story of the four Romanov sisters and their tragic end in a basement at Ekaterinburg in 1918 has clouded our view of them, leading to a mass of sentimental and idealized hagiography. With this treasure trove of diaries and letters from the grand duchesses to their friends and family, we learn that they were intelligent, sensitive and perceptive witnesses to the dark turmoil within their immediate family and the ominous approach of the Russian Revolution, the nightmare that would sweep their world away, and them along with it.The Romanov Sisters sets out to capture the joy as well as the insecurities and poignancy of those young lives against the backdrop of the dying days of late Imperial Russia, World War I and the Russian Revolution. Helen Rappaport aims to present a new and challenging take on the story, drawing extensively on previously unseen or unpublished letters, diaries and archival sources, as well as private collections. It is a book that will surprise people, even aficionados.