Baba Yaga is a witch famous throughout Russia for eating children, but this Babushka Baba Yaga is a lonely old woman who just wants a grandchild--to love.

"Kids will respond to the joyful story of the outsider who gets to join in, and Polacco's richly patterned paintings of Russian peasant life on the edge of the woods are full of light and color." —Booklist 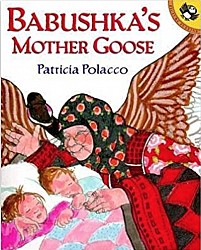 Meet Yasha, whose beard grows down to the ground and keeps growing, and an old babushka who lives in a boot with too many children. Beloved storyteller Patricia Polacco draws from her Russian heritage to retell folktales and rhymes from Mother Goose, Aesop, and Ukrainian folklore that reflect the heart and homeland of her storyteller grandmother, her Babushka. As in all her work, Polacco's enchanting patterns and bold colors provide the perfect match for the stories and rhymes.

A Child Magazine Best Book of the Year

Diamonds on the Bosphorous (Teens)
1028
Tags:

(Orthodox Fiction) Another good historical novel by Aliki to help in the Christian formation of the teenage soul. If you were me and lived in... Russia: A Child's Introduction to Cultures Around the World
Carole P. Roman
4028
Tags:

Exploring the world has never easier—or more fun!—than with Carole P. Roman’s award-winning If You Were Me and Lived In… children’s series. Continuing its globetrotting tradition, If You Were Me and Lived in…Russia explores the magic and wonder of this captivating country. As children ages three to eight take a leisurely stroll around Russia, they will come across some of the country’s most recognizable sites, including the Kremlin, St. Basil’s Cathedral, and the Red Square. Learn about Russia’s yummy delicacies, like borscht and caviar, before playing popular Russian games like chess and “fipe”—a game children may know better as “tag”! Brimming with these and other fascinating facts, If You Were Me and Lived in…Russia is the perfect way to both entertain and educate your children about the great big world that exists outside their windows. From Russia’s festive New Year’s celebrations to popular Russian names, this charming addition to the If You Were Me and Lived in… family explains everything there is to know about one of the world’s most historic destinations. Carole P. Roman is the award-winning author of the If You Were Me and Lived in… series, which won the Pinnacle Award for Best in Children’s Nonfiction in 2012. She collaborated on this installment in the series with her five-year-old grandson, Alexander. Roman also writes the Captain No Beard series, the first of which was named a Kirkus Best of 2012, received a Star of Remarkable Merit, and won the Pinnacle Award in 2012. Getting to Know the World's Greatest Composers series combines a delightful mix of full-color historical reproductions, photos, and hilarious cartoon-style illustrations that bring to life the works of renowned composers, combining poignant anecdotes with important factual information for readers (Ages 8-9). The Firebird and Other Russian Fairy Tales
Arthur Ransome
4021
Tags:

Choice collection of nine classic tales -- gathered by British author on his journeys to Russia in the early twentieth century -- tells of magical beasts, daring young men, frightful giants, wicked witches, and beguiling creatures of the sea. A delight for fairy tale fans of all ages.